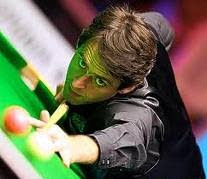 See this guy...He's Ronny Sullivan, and good at snooker. I am not Ronny Sullivan, and snooker is very bloody hard!!
We lucky few who're Ketel 1 fraternity members got spoilt last night by getting to play our own snooker tournament while drinking too many martinis. Dressed up like a bunch of dandies, we looked the part but largely sucked (except Logan, who was apparently born holding a cue).
The problem, and beauty, of snooker I guess is that everythings so far awar! I felt most of the time like I needed a 9 iron instead of a stick! Somehow we came second (by the grace of my crapness we could've won it), but I sank three (that could even be a lie) coloured balls in the whole evening! Balls. Literally.
Not content with that however we all trucked down to Alhumbra to watch a rum cocktail comp, drink tequila, have a chuckle, drink more beer and swing outta there to more watering holes. Last reports were of me trying to enact the Manny Pacquia v Floyd Mayweather fight with various people, falling over a table and getting cut off at Black Pearl. Somehow it took me 45 minutes to walk home - but I fared better than Hippy who decided to go for a bike ride with painful results!
Big ups to Greg for being a good troop-leader, and Hip and Cash Money for taking out top prize...and Serena for winning a trip to Jamaica, mon!
Now I'm gonna try getting fins herbs, the classical delicate herb mixture to work in a drink. We'll see...anyone got any chervil out there?
A
Posted by Flavour Cowboy at 11:27 PM

What I learn without self-interest, I pass on without reserve.

A home for the serious and not-so-serious discussion of food and drink themes, and their philosophies.